Five years ago first student uav competition of Iran was held by "Shahid Rezai" research institute of Sharif university of technology. The competition was held in three phases:
1-Conceptual design
2-Non-Flying prototypes
3-Flying prototypes
In first stage 20 teams could reach to second stage  and in second stage 8 teams could reach to final stage. Final phase was held in four stages of flight tests. After final phase of competition no team could acquire required points for first and second rankings, but third place assigned to Shahbal-1 team from Malek-e-Ashtar university of technology and forth place assigned to  "Shahbal", "Parastoo" and "Arya" teams (from Sharif university of technology,Science and Research branch of Islamic Azad university and Isfahan university of technlogy) jointly.
Zenit and Rafraf teams of Sharif university, Lutos of Shiraz university and Tufan of Shahid Sattari Science and Technology university were appreciated due to innovations in their designs.
Second Student UAV Competition is held this year. In addition to teams participated in this competition there other UAV's built by student groups.
Shahbal-1
Shahbal-1 UAV has been designed and built by students of Malek-e-Ashtar university of technology and with  cooperation with Ghods Aviation Industry group.
Payload:
5 kg near to gravity center and 3 kg in farthest point to gravity center.
Operational range (Flight Radius):
20 km
up to 2km remotely controlled by pilot
more than 2 km is controlled by ground flight station using GPS system
Landing and Take-Off Field Length : 20 m
Endurance: 50 min.
Cruise Speed : 70 km/hr (60 % of Max. speed) at 3000 m altitude (AGL).
Stalling Speed: 40 km/hr at 3000 m altitude (AGL).
Service Ceiling: 3000 m
Rate of Climb: 120 m/min 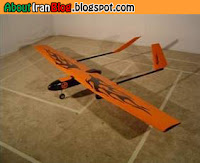 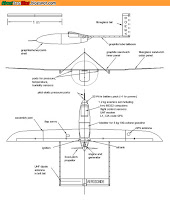 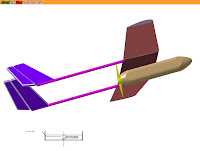 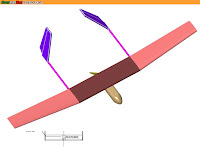 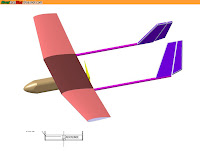 Parastu
Parastu UAV has been designed by B.S. students of "Science and Research Branch of Islamic Azad" university. Parastu is a hand launched UAV without landing gear that can land on dirt and asphalt runways.
Payload of it is 1.5 kg and if it is launched with catapult, Payload of it will increase to 2.5 kg.
Parastu is consisted of 7 pieces that can be assembelled during 5 minutes. Pices can be carried out by a rugged case .
Designers of Parastu improved first generation of Parastu and prepared second generation of it for second student UAV competition. 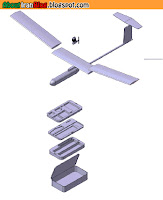 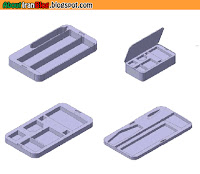 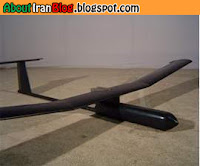 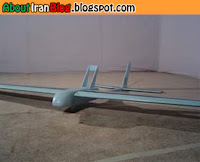