According to Fars news agency report, Iran is constructing fourth largest nanotechnology and silicon industrial city of the world in Broujerd city in the west of Iran since four years ago. Five plants in the field of "Micro-Electronic", "Silicon" industries, "Solar Cells", are under construction in this inrustrial zone for the fist time in Iran and Middle East.


Dr. Mazaheri, designer and contractor of industrial nanotechnology and silicon zone of Iran says after inauguration this project, we'll see a great leap in the field of "New Energies" and "Electronic" industry of Iran.
He indicated to the second plant of industrial nanotechnology and silicon city and said purification factory of silicon metal is one of another plants in this industrial zone which produces purified silicon in two solar grade, 5N and 7N purity and two electronic grade, 9N and 11N purity.
He also stated another factory in this industrial zone is a factory for production of solar modules and cells with capacity of 400 MW of silicon based solar cells and 180 MW of thin film solar cells.he added this factory is one of the largest factories available in the world. Dr. Mazaheri said capacity of production of energy of this amount of solar cells is comparable to nuclear power plants. Every two years , solar cells with capacity of Bushehr nuclear power plant will be produced which is a great leap in the field of "New Energies" of country.
Another factory of this industrial zone is factory of production of 12-inch electronic wafer with capacity of three millions wafers every year.These wafers will be used on production of different types of chip, IC, transistors and diodes.
Factory of production of silicon-based monomers with 100,000 tons capacity is one of the another factories of this industrial zone. This materials is used in oil, cosmetic and medical, energy and automotive and aerospace industries.
This project will be inaugurated two years later, by launching of this plants Iran will be among four top countries of the world at the field of nanotechnology and silicon. Dr, Mazaheri said and added this project was done entirely by the private sector. 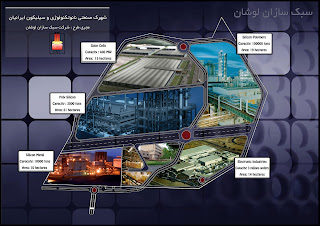